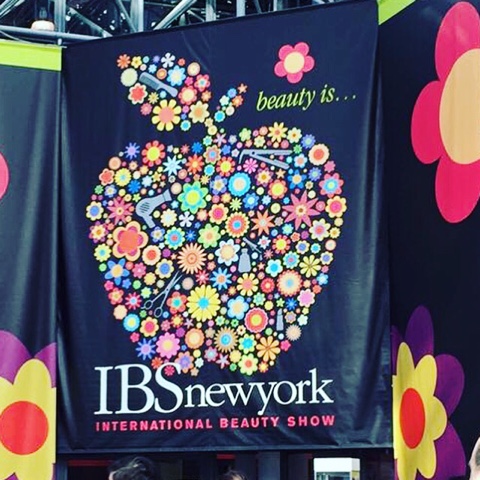 This is my second year attending the IBS New York event. Last year I went with the group of girls from the beauty school I was going at the time. This year I thought it would be really fun to make it a mother daughter trip, so I brought my mom with me.

This event is held at the Jacob Javits Convention Center in New York City as it always is. It was such a beautiful day, clear skies and a high of about 70 degrees. It was really a great day to be in New York. 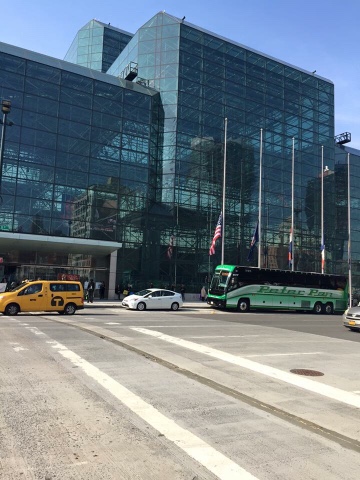 I woke up at around 5am to get ready, I wanted to look cute but stay comfortable since I knew we were going to be doing a lot of walking. We finally arrived at Penn Station in NY at 9:30am. This was my first train trip. The train station in NY was so different than the one in Lancaster. Everyone is running around trying to get to where they are going. It was kind of crazy the rush everyone is always in. 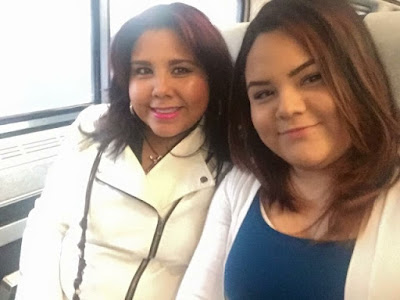 We decided to walk to the convention center since it really didn't seem like a long walk and it wasn't. It took us about 20 minutes to get there and we were taking our time. It gave us the chance to stretch our legs since we had been on the train for 3 hours. Even though it was pretty early in the day, it already was sunny and warm. 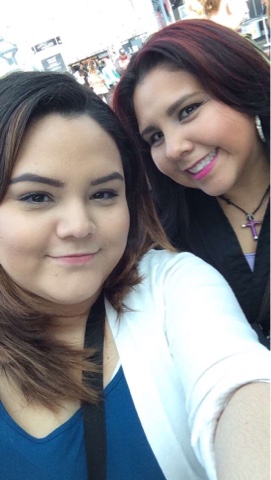 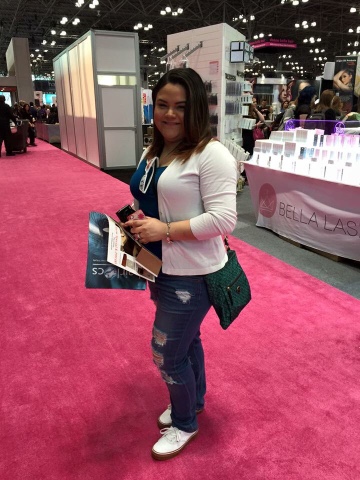 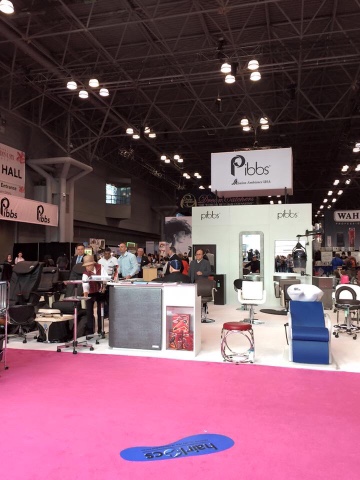 At first we just made a quick round to get a look at all the booths and to see what was available. I definitely went with the intention to spend some money. I love seeing new things and being at a beauty show you can really hold things and try things out before you buy. 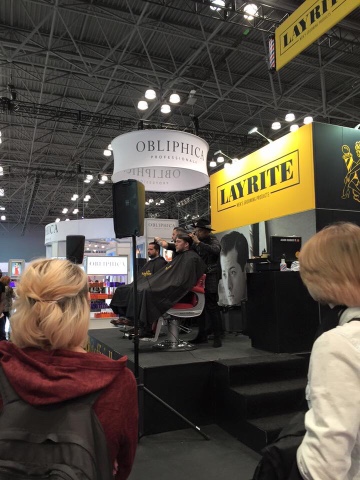 There is such high energy from the educators that are on stage teaching a crowd to the sales associates that are there to answer any and all questions about their product. I love that everyone is so friendly and eager to get the sale. 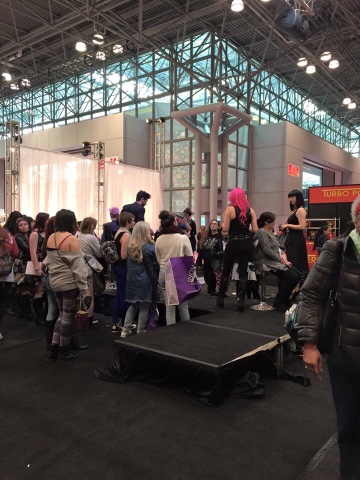 There was so much to see that we didn't really get anything for a while. We did a lot of browsing and taking in the atmosphere. Once we had gone around the whole place we were pretty hungry. We went back outside and got some chicken kebabs and we ate right in front of the convention center. 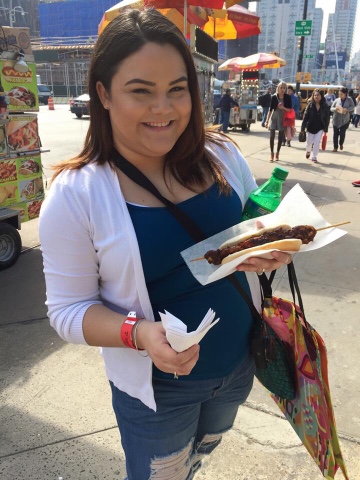 We definitely did a lot of people watching. In an industry that is all about creativity and art you are bound to see some interesting people. Sometimes we would just stand around watching people, especially when we were waiting in lines for things. 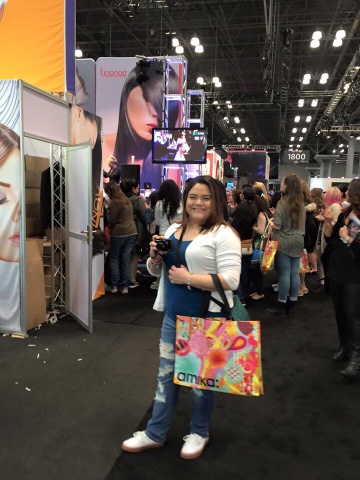 I ended up getting a few things. I wasn't in need of anything so everything I got was just fun stuff I wanted to get.
One of my favorite purchases was the makeup brushes I got. I love makeup brushes and you could never have to many. Since I do freelance makeup every once in a while it is great to be able to get quality brushes on the cheap.
I got about $80 worth of brushes from Crown Brush. I have some I got last year at IBS and I really love them.

I also got a new flat iron. This was one of those impulse buys. I didn't really need it but for $80 you can't go wrong. The guy that sold me the flat iron also threw in a couple of free shampoos.

I also got some lip products. I don't know if these are liquid lipsticks or if they are just matte lipgloss', but I got 5 super fun shades. I wanted to give these crazy colors a try. They were 5 for $20. 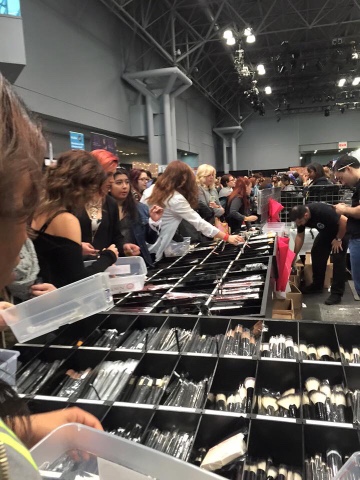 We walked around and shopped for a good 5 hours. There is so much to see, but there is also so many people that it sometimes got hard to shop or even just look around. The makeup brush booth was probably the worst one when it came to crowding. People were literally not moving. It got old really fast. When I was getting the brushes that I wanted, I had to squeeze my way to the table grab and go.
With so many people in one place, you expect to run into the rude and annoying ones as well. 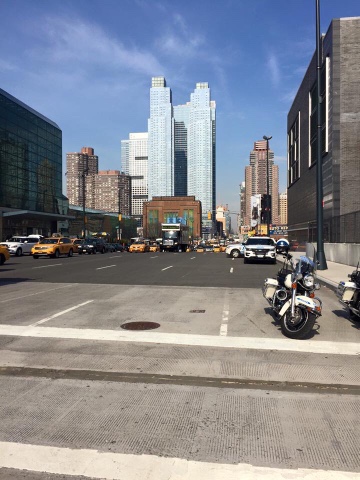 After being inside for the better part of 5 hours, we decided to take a walk to Time Square to enjoy the beautiful day and the city. It honestly was the perfect day to be outdoors. The amount of people on that island is just insane. There were so many people out and about, I almost forgot it was only Tuesday. I can't wait to bee in the city during the weekend. 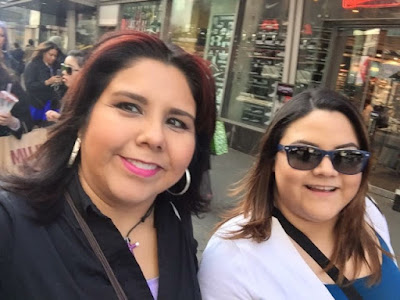 We had a blast just people watching as we got closer to Time Square. We wanted to check out the amazing buildings so naturally we ended up in H&M. I love that a lot of the stores in NY are multi-level. We hung out there and shopped for a little bit. Then we wondered out into the street and ended up in a Forever 21, we got a few things there as well. Our final stop was at one of my favorite makeup stores MAC. I wanted to just take a look but ended buying one of the pro longwear concealers and a paint pot. 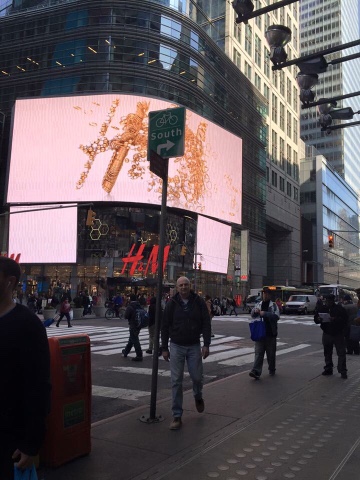 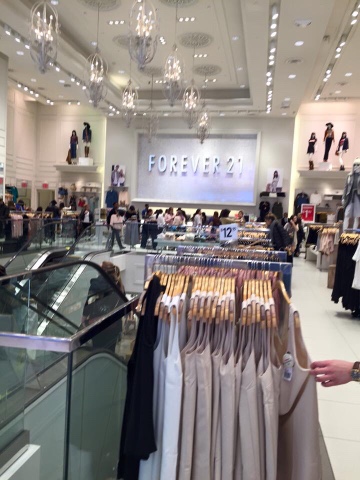 As it was getting late in the day we wanted to get some food and sit down for a while before heading back to catch our train in the evening. I spotted a TGI Friday's on one of the side streets, and we got some dinner there.
My mom had some ribs and fries, and I had a chicken caesar salad. We were finally sitting down and it was fabulous. We had been on our feet since 9am and it was about 4pm when we finally got the chance to sit.
We took our time eating, and once we were done we started making our way back to Penn Station. On the way back we spotted a Macy's and since we still had plenty of time, we went in to check it out. We browsed for a little while and then we were off again. 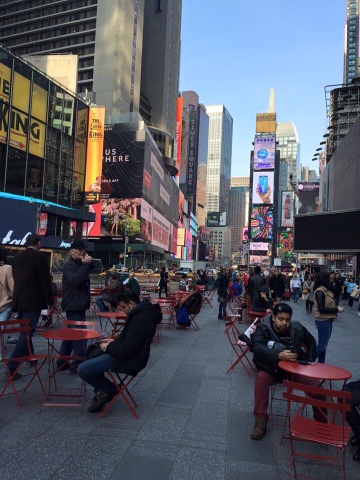 We got to the train station a little earlier than we expected so we just hung out and did more people watching.
We finally got on our train at 6:30pm and we got to Lancaster at 9:30.

All in all it was a great day trip. It was a perfect day and we had a great time in a beautiful city.
We are already making plans to go back!